Mike Krahulik, also known as "Gabe", after the Penny Arcade webcomic character, is a cartoonist known for illustrating Penny Arcade. He is credited with the wraparound cover of the Player's Strategy Guide. As part of a celebrity gaming group known as Acquisitions Incorporated, some of his campaigns have been sponsored and podcasted by Wizards of the Coast.

Penny Arcade is an influential gaming themed webcomic which debuted in 1998. Time magazine has described the webcomic's co-creators, Krahulik and Jerry Holkins, as the tastemakers, and conscience, of [the gaming] industry, with an estimated readership of 3.5 million.[1] Since 2004, the Penny Arcade Expo (PAX) gaming conventions have expanded to include PAX Prime and PAX Dev in Seattle, PAX East in Boston, and PAX Australia in Melbourne.[2] Since 2008, Penny Arcade's characters have at times been shown playing 4th edition Dungeons & Dragons, among other games. 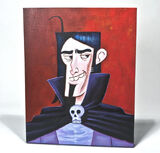 Since 2008, Krahulik, along with Penny Arcade co-author Jerry Holkins, PvP webcomic author Scott Kurtz, and actor Wil Wheaton, has been part of a 4th edition Dungeons & Dragons celebrity gaming group. Krahulik plays the character of Jim Darkmagic, a human wizard. The group's player characters call themselves Acquisitions Incorporated. Their first campaigns were run and podcasted by Wizards of the Coast.[3] More recently, their campaigns are run in front of a live convention audience at the annual Penny Arcade Expo.[4] 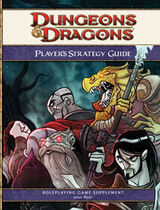 The front cover of the Player's Strategy Guide, feauring art by Krahulik

Krahulik provided the art for the wraparound cover of the Player's Strategy Guide. He initially voiced concern that his comic art style would be a departure from the classic fantasy style of previous rulebooks, but Wizards of the Coast assured him that they were seeking a different art style for the book.[5]

Retrieved from "https://dnd4.fandom.com/wiki/Mike_Krahulik?oldid=21787"
Community content is available under CC-BY-SA unless otherwise noted.