The 4th edition of the Dungeons & Dragons roleplaying game comprises an intercompatible set of rulebooks and other products published by Wizards of the Coast from 2007 through 2013.

Wizards of the Coast acquired the license for Dungeons & Dragons since 1997 during its 2nd edition, and they had previously published the 3rd edition of the game, and the 3.5 edition overhaul updated to third edition based on flaws with initial design. Wizards of the Coast launched 5th edition, the successor to 4th edition, in August 2014. Even so, 4th edition is an edition of the game that served to aid the path to its later editions.

4th edition preview materials became available in 2007, followed by the release of the core rulebooks in June 2008. 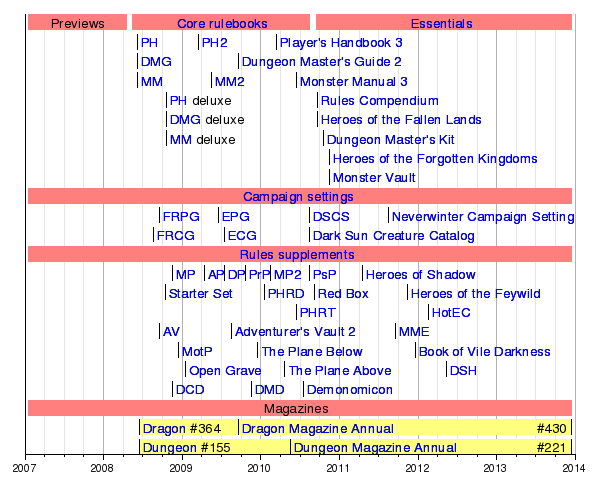 The 4th edition license for third party publishers originally contained a clause which required 4th edition compatible product lines to stop using 3rd edition's open license. Mike Lescault, community manager for Wizards of the Coast, denied that the clause was a "poison pill", and characterized it as a "conversion clause".[1]

In 2009, Paizo released a complete Pathfinder roleplaying game, based on version 3.5 of D&D, to compete with D&D's 4th edition. The two competing product lines being actively developed and published at the same time was sometimes described as fueling years-long edition wars between those preferring 4th edition D&D, and those preferring the 3.5 based Pathfinder. A 2012 third-party card game entitled Edition Wars satirized this competition.[3]

Sales of the June 2008 set of core rulebooks exceeded Wizards of the Coast's expectations, requiring them to order additional books to be printed even before the books' release date.[4] By third quarter 2010, however, sales of 4th edition products were tied with those of Paizo Publishing's Pathfinder, based on supplier interviews.[5]

MMORPG designer Michael Zenke, guest blogging for Wired, gave a positive review of 4th edition, mentioning the lack of complicated mechanics such as 3rd edition's grappling rules, and the martial powers available to fighters being as interesting as magic has always been for spellcasters.[6]

Although, fans of the game were not as nice. In all honestly, the changes made in this edition of Dungeons & Dragons were major in the attempt make it unique. Theses changes were to clarify the mechanics of the game, yet fans seemed to have issues with how much focus was on mechanics over lore expansion. Regardless, the real concern was streamlining the character creation process in ways that had fans questioning the design. Even so, this streamlined design paved the path for the streamlined content of 5th edition, which proved to become the most popular edition of the game yet.