In Dungeon!, each adventurer's objective is to collect treasure by defeating monsters, and be the first to return to the dungeon's entrance with the required amount of treasure. The dungeon is split into 6 levels, with higher numbered levels occupied by more difficult monsters guarding more valuable treasure. Combat proceeds by moving into a space occupied by a monster and rolling two six-sided dice (2d6). 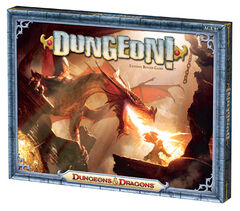 Wizards of the Coast published an updated edition of Dungeon! in October 2012.

The 2012 edition renamed the adventurers after the classic four classes from 3rd and 4th edition Dungeons & Dragons: halfling rogue (the elf), dwarf cleric (the hero), human fighter (the superhero), and elf wizard (the wizard). Its visual style, such as fonts and art style, is similar to 4th edition D&D, with a box top illustrated by Michael Komarck. 4th edition D&D designers Peter Lee, Mike Mearls and Rodney Thompson were among the game's credited playtesters.

The most recent edition of Dungeon! was published in June 2014, with the same rules as the 2012 edition and cartoon style art.

Wizards of the Coast suggested a number of optional rules for altering Dungeon! gameplay.[1]