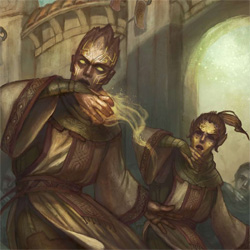 The Monk class specialises in unarmed combat with the assistance of Ki Focuses. Some Monk powers have two options to choose from: attack style and move style. Each one requires a standard action or a move action respectively and can help the monk in various situations.

A 1st-level monk begins trained in four of the following skills.

A monk with the Monastic Tradition class feature chooses one of the following options. Each option grants a "flurry of blows" at-will power and an additional benefit.

A monk with the Unarmed Combatant class feature can use monk unarmed strike as a weapon for weapon keyword powers while having one hand free. The monk unarmed strike can't be enchanted as a magic weapon, but does benefit from a ki focus's bonus to weapon attack rolls and weapon damage rolls.[PH3:63]

A monk with the Unarmored Defense class feature gains a +2 bonus to AC while not using a shield and wearing cloth armor or no armor.[PH3:63]

Monks usually channel their psionic energy through an item called a ki focus, which is a wooden practice weapon, prayer beads, a manual of lore, or some other object a monk studies or uses during training or meditation. After you attune yourself to a ki focus, you can use it as an implement when it is on your person.

You can also use a weapon with which you have proficiency as an implement. When wielding the weapon as an implement, the weapon's characteristics-proficiency bonus, damage die, and weapon properties like defensive or high crit-are irrelevant to your implement powers.

Your monk attack powers are implement powers, meaning they are enhanced by the powers, properties, and enhancement bonus of your ki focus or a weapon you use as an implement. All your monk attacks can involve the use of a weapon, whether it's your monk unarmed strike or a manufactured object. Because the attacks can draw on the magic of your ki focus, they are equally effective whether you wield a quarterstaff or batter your foes with punches and kicks. You might want to use a weapon so that you can take advantage of feats such as Shielding Whirlwind Style or Crashing Tempest Style. You can switch weapons with ease or pick up whatever is at hand to attack your foes, drawing on the power of your ki focus instead of relying on the strength of magically enhanced steel.

These feats have the monk class, or hybrid/multiclass monk, as a prerequisite. Additional prerequisites are noted. For example, characters who multiclass into monkdo not necessarily gain the Combat Challenge feature, so may not qualify for feats requiring that feature.

Refer to the Monk section in the Paragon Path page

Retrieved from "https://dnd4.fandom.com/wiki/Monk?oldid=35181"
Community content is available under CC-BY-SA unless otherwise noted.