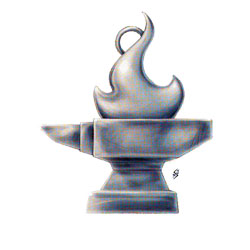 Moradin is the lawful good deity of creation and patron of artisans, especially miners and smiths. He carved the mountains from primordial earth and is the guardian and protector of the hearth and the family. Dwarves from all walks of life follow him. He demands these behaviors of his followers:

Moradin encourages others to bring works into being that will see generations of use. He was intimately involved in hammering the raw creation of the primordials into a durable and refined world that mortals could thrive in. Now that the work of original creation is done, his followers focus on the lasting works of hammer and forge, chisel and stone.

Moradin and Torog oppose one another fbr many reasons, including their competing claims on the domain of earth. Moradin sees earth as the foundation of creation and a source of stability. wealth, and strength. He honors stone as the bones of the world and loves mountains as the domain's greatest symbols.

Bahamut and Moradin share the domain of protection in a spirit of solidarity. Moradin emphasizes guardianship of home. family, and clan, while Bahamut takes a wider view of protecting society and good people wherever evil finds them. When danger comes, the followers of Moradin draw back to stand on solid ground, and Bahamut's faithful come forward to strike down threats.

Moradin resides in the Astral Domain of Celestia alongside Bahamut and Kord. He counts Asmodeus as one of his chief enemies.

Retrieved from "https://dnd4.fandom.com/wiki/Moradin?oldid=37098"
Community content is available under CC-BY-SA unless otherwise noted.