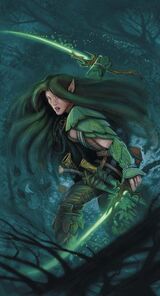 This illustration of an elf by William O'Connor introduced the ranger in the Player's Handbook.

The following traits are common to original rangers, hunters, and scouts.

A 1st-level ranger begins with hit points equal to 12 plus the ranger's Constitution score, and a +1 bonus to Fortitude and Reflex defenses. A ranger gains 5 hit points per level.

Original rangers, hunters, and scouts are trained in either:

Plus any four skills from the ranger class skill list:

The original ranger is the subclass of ranger introduced in the Player's Handbook.[PH:103]

An original ranger has healing surges per day equal to 6 plus the ranger's Constitution modifier, and cloth, leather, and hide armor proficiencies.

Characteristics: You combine fast, hard-hitting melee attack power with excellent ranged attack ability, and shift easily from melee to ranged combat. You are moderately resilient in battle, but you prefer hit-and-run attacks or ambushes to prolonged slugging matches. Hit hard, get out; that’s the ranger’s way.

Religion: Rangers favor deities of nature and of the hunt. They often revere Kord, Melora, or the Raven Queen. Evil or chaotic evil rangers usually worship Gruumsh or Zehir.

Races: Elves are ideal archer rangers. Humans, halflings, dragonborn, and eladrin are all sometimes drawn to the wandering life of a two-blade ranger.

Rangers receive a beast companion from these categories: bear, boar, cat, horse[Dr392:24], lizard, raptor, serpent, simian[Dr392:24] , spider or wolf. These describe general categories rather than a specific animal - anything beyond statistical details are free to be changed.

Your beast companion is considered a creature and ally, and may be affected by powers.

You may only have one beast companion at a time. You can dismiss a companion at any time, but gaining a new one requires a bit more work. To get a new one, you need to spend a few hours seeking a replacement in an environment where it can be found. In rare cases, the GM may assign an adventure to obtain your replacement.

As part of training, you learned the Raise Beast Companion ritual, and can use it to revive your companion from the dead even if you are otherwise unable to perform rituals.

Your beast companion doesn't normally take actions during combat. It acts on your turn as you direct it, requiring you to spend your actions to instruct the beast to perform some actions:[MP:41]

Powers that rely on your beast companion to attack use the beast's attack bonus and use |B| to denote the beast's damage die.

Original rangers who do not choose the Beast Mastery class feature gain the Fighting Style class feature at 1st level, and choose one of the following options. Each option grants a bonus feat, regardless of whether the ranger has met the feat's normal prerequisites, and may have additional effects.

A ranger with the Hunter's Quarry class feature can, once per turn as a minor action, designate the nearest visible enemy as his or her quarry. This designation lasts until the encounter ends, the quarry is defeated, or the ranger designates a different target. Once per round, the ranger deals 1d6 per tier damage when hitting his or her quarry with an attack.[PH:104][U

Original rangers who do not choose the Beast Mastery or Running Attack class features receive the Prime Shot class feature.

If none of your allies are nearer to your target than you are, you receive a +1 bonus to ranged attack rolls against that target.

Original rangers who do not choose the Beast Mastery or Prime Shot class features receive the Running Attack class feature.

If you use a standard action that lets you move (such as a charge or the skirmish shot power), and you end that movement at least 2 squares away from where you began that move, you gain a +1 bonus to attack rolls made as part of that standard action.[MP2:32]

Hunter is a subclass of ranger introduced in Heroes of the Forgotten Kingdoms.[HotFK:149]

A hunter has healing surges per day equal to 6 plus the ranger's Constitution modifier, and cloth and leather armor proficiencies.

Hunters do not gain leveled at-will, encounter, or daily attack powers, and instead receive improvements to their class feature powers.

Hunters gain the Archery Style class feature at 1st level, and choose one of the following options. Each option grants a bonus feat, and may have additional effects.

Aspects of the Wild (hunter)

Hunters gain aimed shot, clever shot, and rapid shot as at-will powers at 1st level. Each of these powers allows a hunter to make a ranged basic attack with an additional benefit.[HotFK:155]

Scout is a subclass of ranger introduced in Heroes of the Forgotten Kingdoms.[HotFK:175]

A scout has healing surges per day equal to 7 plus the ranger's Constitution modifier, and cloth, leather, and hide armor proficiencies.

Scouts do not gain leveled at-will, encounter, or daily attack powers, and instead receive improvements to their class feature powers.

Aspects of the Wild (scout)

Scouts gain power strike as an encounter power at 1st level. Power strike triggers on a melee basic attack that hits, and adds extra damage to the attack.[HotFK:182]

Scouts gain the Two-Weapon Style class feature at 1st level, and choose one of the following options.

Ranger powers, having a martial or primal power source, are also called exploits or evocations.

Key
B
Beast keyword or range

Characters who did not start as rangers and who do not already have a multiclass feat of a type other than multiclass ranger may multiclass as rangers by taking one of the following entry feats.

In addition, each ranger entry feat grants all of the following benefits: