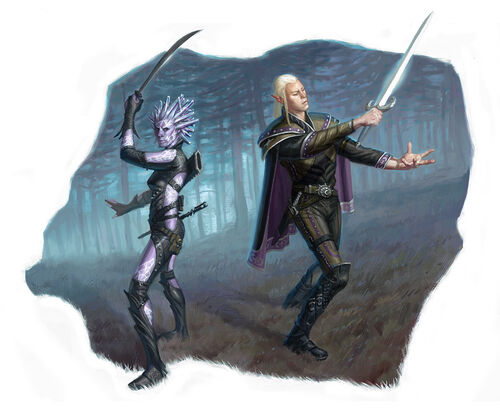 Characteristics: Your melee skills are most important, but you also have attacks that can hit multiple creatures or injure creatures at range. Your defensive powers can protect your allies and yourself.

Religion: Swordmages favor deities of magic or skill. Corellon, Selûne, Torm, and Tymora are common among swordmages of good heart. Swordmages of a darker bent often revere Shar, regarding their unusual skills as a secret art to be kept hidden from the uninitiated.

Swordmages are all trained in the skill Arcana (Int). From the class skills list below, choose three more trained skills at 1st level

By spending 1 hour of meditation with a chosen light or heavy blade, you forge a special bond with the weapon. As a standard action, you can call your bonded weapon to your hand from up to 10 squares away.

If your bonded weapon is broken or damaged, you can spend 1 hour of meditation to recreate the weapon from a fragment. (This process automatically destroys any other fragments of the weapon in existence, so you can't use it to create multiple copies of a broken weapon.)

The Swordmage Aegis class feature grants one of three at-will powers, aegis of assault, aegis of ensnarement, or aegis of shielding. Each of these three powers marks a target, and allows the swordmage to take an immediate action triggered when the target hits with an attack that did not include the swordmage as a target. The choice between these powers also affects some other class powers.

The Swordmage Warding class feature grants the swordmage a +1 bonus to AC while conscious and wielding either a light blade or a heavy blade. This bonus increases to +3 if the swordmage is wielding the blade in one hand, and has the other hand free, that is, not carrying a shield, an off-hand weapon, a two-handed weapon, or anything else.

These feats have the swordmage class, or hybrid/multiclass swordmage, as a prerequisite. Additional prerequisites are noted.

In addition, each swordmage entry feat grants all of the following benefits:

A character may be created as a hybrid of swordmage and another class other than swordmage. The hybrid swordmage bonus to defense is +1 Will. The hybrid's swordmage class features are Swordbond, and Swordmage Aegis (hybrid), which is the same as Swordmage Aegis except that aegis of assault, aegis of ensnarement, or aegis of shielding can be used only once per encounter, and the hybrid swordmage regains the power's use if its previous target drops to 0 hit points or if its mark is superseded by another mark.