Only one subclass, Marshal, has been published for the warlord class.

Marshal is the subclass of warlord introduced in the Player's Handbook.[PH:143]

The Class Compendium: Warlord article in Dragon 397 redefined the warlord class as the martial subclass, and in the process, made a number of changes.[Dr397:11] Consequently, Wizards of the Coast made the article available to download without a subscription, as an update to the original warlord class.

A warlord that chooses Archer Warlord as a class feature will not have chainmail or light shield proficiency.

A 1st-level warlord begins trained in four of the following skills.

There are three choices to make concerning the class features.

You have the option to select the Archer Warlord class feature. If you do, you begin with neither chainmail nor light shield proficiency. In exchange, you gain proficiency with military ranged weapons, and you may use Strength instead of Dexterity for attack and damage rolls when making a ranged basic attack with a bow.[MP2:82]

Choose one of the following:

Choose one of the following. Some warlord powers have additional effects if the user has a specific Commanding Presence class feature.

You gain inspiring word, which functions like a power targeting yourself or a nearby ally. It is usable two or more times per encounter (depending on character level), but not more than once per round. The target can spend a healing surge, and gain a bonus to the amount of hit points restored by it. The range, number of uses per encounter, and bonus hit points depend on your level.[PH:145]

These feats have the warlord class, or hybrid/multiclass warlord, as a prerequisite. Additional prerequisites are noted.

The published multiclass warlord feats are:

A character may be created as a hybrid of warlord and another class other than warlord. The hybrid warlord bonus to defense is either +1 Fortitude or +1 Will. The hybrid warlord class features are limited to Inspiring Word (Hybrid), which counts the same as Inspiring Word except inspiring word can be used only once per encounter, and Warlord Leadership, which functions as normal.

A hybrid warlord taking the Hybrid Talent feat may choose either Commanding Presence (Hybrid), which counts the same as Commanding Presence except its benefit can be granted only once per encounter, or Warlord Armor Proficiency, gaining proficiency with leather armor, hide armor, chainmail, and light shields.[PH3:154]

The rulebooks classify warlord as primarily a leader class, with supportive abilities such as granting party members extra actions and causing enemies to take extra damage from the party. Strength, Intelligence, Charisma are listed as the class's overall key abilities. Strength is important for all warlord builds, but the importance of the latter two varies between builds.[PH:143] Dexterity may be a dump stat for many warlord builds, as it has few uses for warlords outside certain weapon feat prerequisites or wearing light armor on low Intelligence builds.

The following build options are given for starting 1st-level warlords. You may use a build option as a template, or invent your own starting build.

The bravura warlord build option takes big chances for big potential payoffs, with healing powers to fall back on when the dice don't fall the right way.

The insightful warlord build option grants a number of attack roll and defense bonuses to allies with its attacks.

The skirmishing warlord build option focuses on mobility and on ranged weapon attacks that benefit allies on a hit.

The tactical warlord build option weakens enemies with its attacks, making it easier for allies to hit affected enemies and deal high damage.

The warlord has a martial power source. Warlord abilities often take the form of weapon attacks, and get their power from experience, determination, and brute strength.[PH:143]

Warlords are not necessarily warlords, or even leaders, from a roleplaying perspective. They need not be a military officer or member of the ruling class, or even the decision maker or spokesperson for the party. 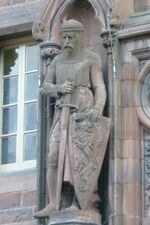 The marshal was a base class introduced in the third edition Miniatures Handbook. Its class features included the ability to grant allies move actions, and auras adding bonuses to certain rolls made by allies.[2] The marshal appeared in the second design draft for 4th edition before being renamed as the warlord.[3]

The 4th edition warlord was first published in the Player's Handbook core rulebook[PH:143], then expanded in the Martial Power[MP:100] and Martial Power 2[MP2:80] supplements.

Miniatures produced by Wizards of the Coast based on 4th edition rulebook descriptions of the warlord class include: 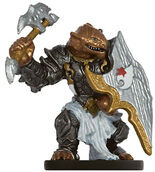